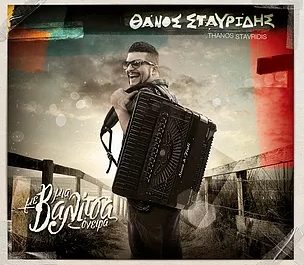 Last week a surprise gift arrived from Greece, the introductory LP from Thanos Stavridis. With the help of the cover I could find out that his favorite instrument is the accordion which is surprising cause his home country is more known about bouzouki or guitar. After listening it many times I could say the two determined element of its music is jazz and folk music. Jazz is more dominant, however many times the folk side/motif come into view.

The recordings of the musicians are not a constant composition, all numbers recorded in different line-up, with a little exaggeration, but this is a benefit of the album. Once as we would sit in a bar while a band softly playing in the background (Morning Sunshine), and on other hand- staying in jazz line – I was charmed by the accordion and the guitar solo. Of course I liked better the Greek melodies such as “Blue 9”, which pop up the Turkish whistle the zurna. I would rank as a specialty the INEMA song cause here a guest singer Matoula Zamani has been invited to the studio, secondly because they put some oriental motif and, last but not least, very interesting instrumentation, they put a lot of ideas into the 8 min long song.

A suitcase full of dreams is a promising debut album, where Thanos Stavridis did not want to be in the front but he wants to show more his ability as a composer.

I feel The marriage of jazz and folk music is still taking shape, according to him, sometimes the jazz is stronger, sometimes the folk music, however this album is a guarantee that in the future his career should be monitored.

Ukraine at Odessa Philharmonic Theater with “Tales from the Box”

Athens, Half Note with dRom and Aggeliki Toubanaki special guest

Frankfurt with dRom at OMIKRON